The 70:20:10 training model is most effective for learners 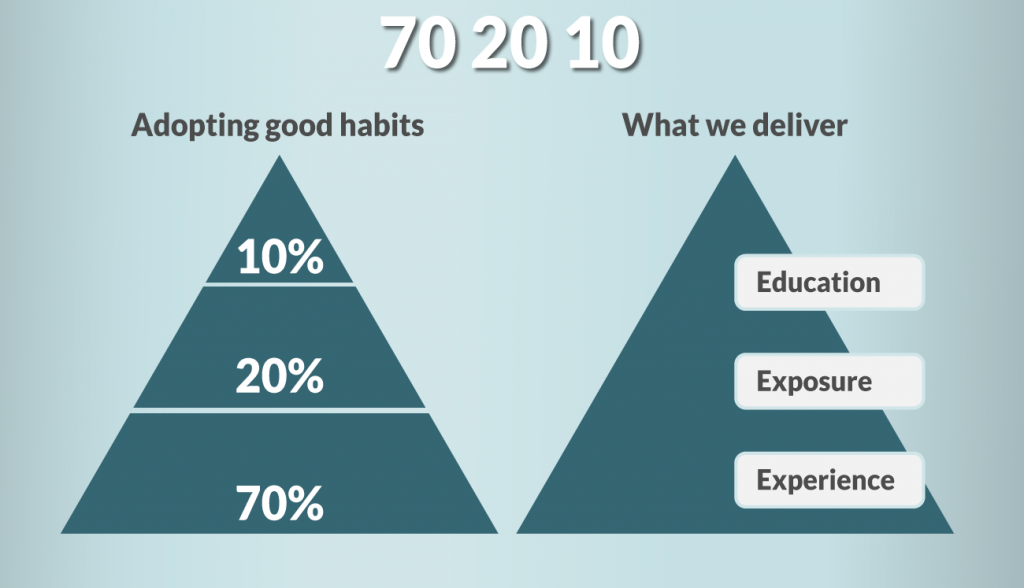 When it comes to success with coaching and training the 70:20:10 method is more than just a fad

When it comes to success with coaching and training the 70:20:10 method is more than just a fad.

A study by business transformation consultancy Towards Maturity found that learners who stick to using the methodology are much better equipped. Using this method, 70 per cent of knowledge comes from on the job activities, 20 per cent is from observing others and only 10 per cent comes from formal training classes.

The research reveals that staff following this methodology are:

Taking the experiences of 1,600 learners across the globe, the results form the basis of the recently published 70+20+10=100: The evidence behind the numbers report. The report was unveiled at the Learning Technologies 2016 conference in London in February.

In the report, Towards Maturity said that better learning outcomes are gained using this model because the ratio acts as a good rule of thumb which then enables a culture of continuous learning to flow. It found that organisations which stuck to the methodology were naturally:

Towards Maturity founder Laura Overton said: “What is clear from our analysis of the 70:20:10 methodology is that organisations active in these areas are delivering better benefits than those who are not.”

But it wasn’t all positive as the study found many Learning and Development Heads remained sceptical of the 70:20:10 methodology because it implies formal learning doesn’t work and that it was simply a way to justify cutting training budgets. The survey also showed that some L&D Heads felt the ratio numbers were set in stone.

But Towards Maturity said such negative or restrictive perceptions of the methodology were myths which could be argued against.

Overton said the findings should and must act as a wake-up call to L&D heads to consider using the model in their own organisations. Currently, just 47 per cent of L&D professionals use the model to shape their learning approach the survey found. This was in spite of the fact another key finding from the survey was that 90 per cent of staff said they preferred to learn from their peers.

As a business improvement organisation, Sales Improvement Services places a great deal of emphasis on helping our clients develop people that add value to their organisations. You can watch our video here to find out how integral the 70:20:10 methodology is to the way in which we provide our coaching and training opportunities.